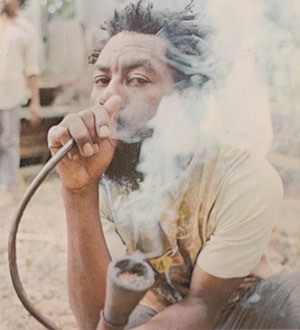 The first to do this was U-Roy. Exploding on the scene in 1970, he held the top three spots on the radio charts for something like six weeks. With that, the deejay phenomenon had arrived. It would soon travel abroad, notably to New York City, where an American spin on dancehall culture — in particular by Jamaican immigrant and Bronx resident Kool Herc — spawned break dancing and hip-hop music.

In a word, then, U-Roy was an immensely important figure in modern popular music. So 'nuff respect to NPR for paying tribute to him.

I must, however, register my displeasure over some errors in the tributes.

The interview segment began innocuously enough with a music clip featuring a vocalist chanting in Amharic, from a 1969 record called “Rightful Ruler.” It's a great cut to be sure, but the voice chanting in Amharic is not U-Roy's. It belongs to his collaborator on the disc, Peter Tosh. The part with U-Roy was faded down so low that listeners coud barely hear him. Then the guest for the segment, Billboard writer Patricia Meschino, compounded the error by talking about the significance of the Amharic lyrics as if they were voiced by U-Roy. 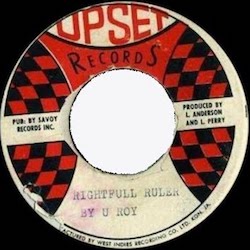 “Rightful Ruler” is a somewhat obscure track, not an obvious choice by any means. I don't know how it was chosen to introduce the U-Roy piece. But I suppose if I were a “Here and Now” producer assigned to research an artist I had never heard of, I'd probably start with Wikipedia. There is indeed an article about him, with one section that is suspiously noteworthy:

Rastafarianism has been a feature of Beckford's lyrics from his earliest singles to his latest album Pray Fi Di People. Beckford's second single “Earth's Rightful Ruler” (1969) opens with a profession of Rastafarian faith given in the Ethiopian language Amharic:

Taken separately, the facts are accurate: U-Roy's lyrics do invoke Rastafarian faith, and “[Earth's] Rightful Ruler” does “open...with a profession of...faith.” But poor editing, or a perhaps misinformed writer, blur those facts, leading the unsuspecting reader to believe that the vocals were recorded by U-Roy when they were not. Was this the source of “Here and Now's” gaffe? It is certainly plausible.

Incidentally, there's another minor error on Wikipedia concerning the song title. I looked through my record collection, and found the cut on three compilations:

On all three, the song is listed as “Rightful Ruler.” I've looked through online discographies, too, and every 45 single issue shows the same title on the label. Only Wikipedia titles it “Earth's Rightful Ruler.” I think that's wrong.

I will probably edit the Wikipedia article to reflect the correct title, so you might see the correction by the time you read this article.

“Here and Now” redeems itself (sort of)

To be fair, the “Here and Now” interview included a second clip which this time featured U-Roy's voice prominently. The cut was “Jah Jah Call You,” a somewhat perfunctory performance from the mid 80s. Which left me scratching my head: why that track? There are so many better examples of his talent that “Here and Now” could have chosen. But perhaps I shouldn't complain. At least listeners got to hear U-Roy's voice, for real this time.

The other on-air segment, “Remembering U-Roy, Jamaican Dancehall Icon,” aired on All Things Considered on February 19, 2021.

It was mostly good, but there was this odd remark by reporter Anastasia Tsioulcas:

He started out as a DJ in 1960s Kingston, doing a bit of vocal patter while he flipped LPs between songs.

No no no. If they're playing reggae records, they're playing 7-inch 45s. For one thing, because the vast majority of ska and reggae music was released on singles, not LPs. I'll admit I'm nitpicking here, but it makes me think the reporter doesn't really know much about reggae. That's understandable — reporters can't be experts on everything — but isn't there anyone in the music department who could have looked over her script?

And, really, wouldn't deejays in any genre be playing singles? In a club where it's generally dark, I imagine it would be difficult to try to cue up a track in the middle of an album side. I'll bet that in the vinyl days of yore, club djs, whatever the genre, played singles. And I'll bet they still do, unless they've switched to a digital format. 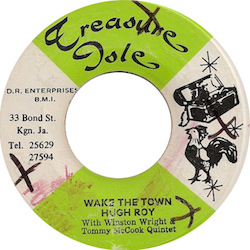 There's also a mistake in the web page that accompanies the audio story. The lyrics to U-Roy's “Wake the Town” are transcribed thus:

Now, wake the town, and tell the people I've got a musical disc I can't afford to delay.

That should read, “...a musical disc and I can't afford to be late”

Last but not least — in fact, last but best — is the web-only article “U-Roy, Jamaican Vocalist Who Defined Dancehall And Presaged Hip-Hop, Dies At 78,” by the aforementioned Patricia Meschino.

The author is knowledgeable, and her 800+ word article is well written. Were I to continue nitpicking, I might point out that U-Roy's contemporary is not merely Lord Comic but Sir Lord Comic, thank you very much.

But that would be too nitpicky even for me. I will say it's a good read, informative (I didn't know U-Roy's soundsystem was named after his sons!), and includes a great video of the originator performing an early hit titled “Version Galore.”

It's a great example of toasting because the lyrics demonstrate how the deejay craft is rooted in dancehall culture:

And that was the raison d'être of the deejays: to keep patrons coming through the door and into the dance, helping the sound system make money.

Good choice, NPR. And again, thanks for shining a light on an artist whose impact deserves our attention.

Thanks to Emma looking over the article and suggesting improvements.